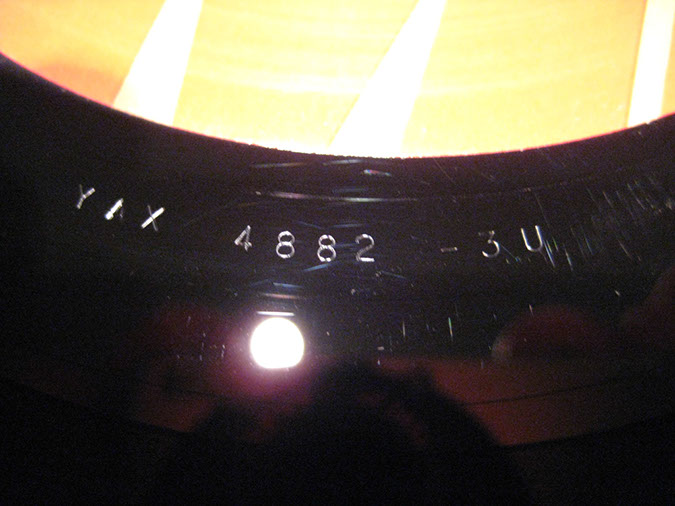 The following informations are partially taken from an article pubblished in Record Collector on may 2012 about Beatles first pressings.

The Matrix code shows the master tape recordings used to cut the lacquer disc in the studio, usually three letters followed by a two- or three-digit number. For example, the Please Please Me album mono master tapes were denoted by the number XEX 421 for Side 1 of the album and XEX 422 for Side 2 of the album. These were also printed on the label as well as being stamped in the dead wax at the end of the record (close to the label). However, the stamped matrix number at 6 o’clock in the dead wax was followed by -1N, which denoted that the record had originated from the first master matrix disk, cut from the master tape. The mother number, stamped at 9 o’clock in the dead wax, shows the mother tool used. Typical ‘Dead Wax’ markings for a later fifth pressing first year of production and beyond. This is the point at which I got bogged down by the vinyl disk variations, (which for the first year of production are really just differing stamper codes) and ran into diffìculty with some terminology such as “first pressing”, for example. As a result, and for my own clarity, I have recapped some important terminology below:

The master tapes: the final mix/edit of the album dubbed from the multi-track recording session tapes, which during the 50s, 60s, 70s, 80s and a large part of the 90s, were recorded on to V4in audiotape.

The Lacquer (acetate): cut by a disc-cutting lathe in the studio from the master tape.

The master disk or matrix: made by electroplating the lacquer to form a metal “male” version of the lacquer.

The stamper disks/tools: the male stamper tools (matrix clones), which were actually fìtted to the record presses making the records.

So what is a “first press”?

During the early pioneering days of record making, the sound was recorded straight on to a disc or lacquer, from which the matrix disc was made. Later, audio tape became popular as this allowed more takes to be recorded before cutting the lacquer. Originally the matrix disc would have been used to actually press the fìnished records, as a few hundred to a thousand would have been enough to satisfy demand. However, as demand grew and the manufacturing quantities increased, a further process was added whereby a mother tool would be formed from the matrix disc, which in turn was used to manufacture identical stamper tools.

These stamper tools could then be fìtted in pairs (Sides 1 and 2) to the factory presses. The advantage of this additional process was that multiple stamper tools could be used in many presses to simultaneously manufacture identical records to the mother disk, whilst prolonging the life of the originai matrix disk as it was now not used in the factory to press the fìnished records. It was only required to manufacture new mothers, so became a library item.  Hence a mass production process was facilitated.

Originally, a first press was any record pressed using the originai first matrix disk. Once this was worn out or damaged, a new matrix disk was to make the stamper tool used to press the record.

The stamper code: stamped at 3 o’clock, this is a series of letters, which, when decoded, shows the stamper tool number actually used to stamp the record you are holding, as well as the rest of the same batch.

Hence, once decoded, a first press would technically have a ‘mother’ code 1 at 9 o’ clock and a stamper code G at 3 o’clock and that’s it. Anything else is technically not really a first press. Stamper code R is a second press, A is a third press, M a fourth press and so on.

However, it is not quite that simple. Because Beatles records were mass produced, pressings 1, 2, 3, 4 (and possibly more, on occasions) were being made simultaneously next to each other on different presses, so plenty of 1M stamped records would have been made before 1G stamped records, as the letters and number just refer to the tool used to stamp the records, so at least four would have been running at the same time.

This effectively means that your chances of getting a true first press even on the day of release, having ordered in advance two weeks beforehand, were less than one in four.

To complicate the issue further, the stamper tools were not fìtted to the pressing machines in matched pairs. They were fìtted randomly, as long as a Side 1 tool was married to a Side 2 tool.