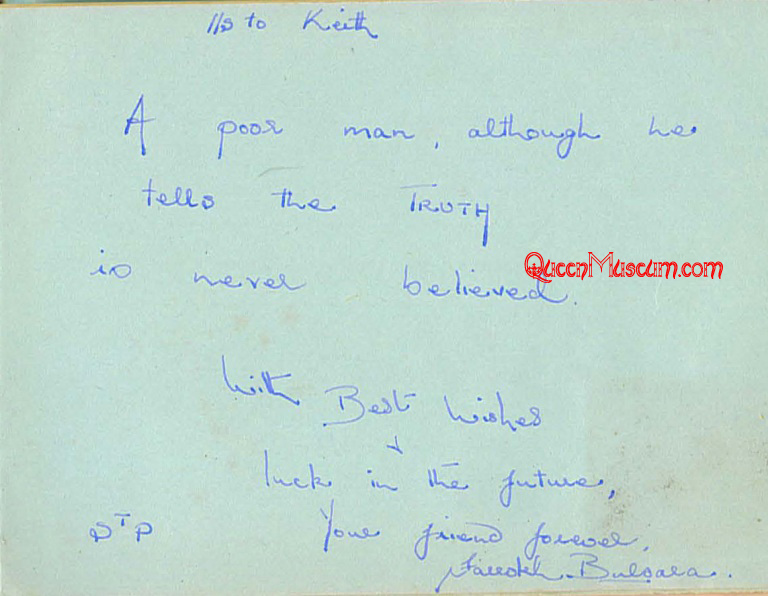 Some years ago I’ve been contacted from a Freddie’s or better a F. Bulsara’s school friend in his India period: Keith Winson.

He gently allowed me to show an unique personal message that the future Freddie give to him and a full story to share with all his fans.

I first met Freddy when he came to our school, a boys boarding school, St Peters in Panchgani Bombay India in 1956, I think,He was 1 year junior to me, and we both immediately bonded somehow
as we were both shy and timid boys. I can remember he had to wear a very painful brace on his teeth which he hated, and some boys were very unkind about that. Even from about the age of
12 he was very talented on the piano and would just play by ear anything he
had heard.

He did take piano lessons I remember and might have learned the violin, but im unsure about that.We used to sit at the piano and sing duets together of the hit songs of the day.We both had fantastic soprano voices and were both in the church choir. Incidently we both used to compete in singing competitions and I remember even beating him in one. Imagine that! There was friendly rivalry however.
As we grew older, he became more and more into his music and as you know formed a school band called the “Hectics”.
I did my final year in 1962 which is when he wrote those personal words to me in the autograph book, which was very popular amongst school kids at the time,and signed it as Farook Bulsara, his real name.
I went on to migrating to Australia where I live today, but still have very happy memories of those early years.
I hope you enjoy viewing this very personal and sentimental part of my life.

PS just to furnish some proof it is genuine, I am also including a
certificate to show I was in the school at that time in 1962