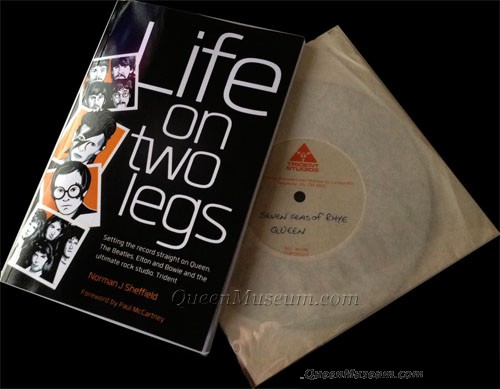 The Book titled Life on Two legs was out in July 2013. It’s the story of Trident Records told by his founder Norman Sheffield. For the avid Queen fan and collector is really a new fresh point of view of the early period of the band. The most interesting one for me.. because it’s when a band starts to have first achievements, and everything seems electric.

Ok you probably know about the song Freddie dedicated to the author, “Death on two legs” from A Night At The Opera album… but there’s no nasty reply to that song… at all.. opn the contrary you read of course the point of view of the man who actually discovered Queen and brought them to the Stars….

Everything is written very well and you go very fast because want to read facts, stories etc… As was for reading the “Becoming Elektra” from Jack Holzman, this will also let you jump in those)late 60’s/early 70’s when inside Trident Studios some historical recording were made…. Beatles, Genesis,Bowie, Elton John, Queen…..

The Book is published by Trident Publishing LTD and it’s of course available on line!!

One thought on “Life On Two Legs: Norman Sheffield, Trident and … Queen”