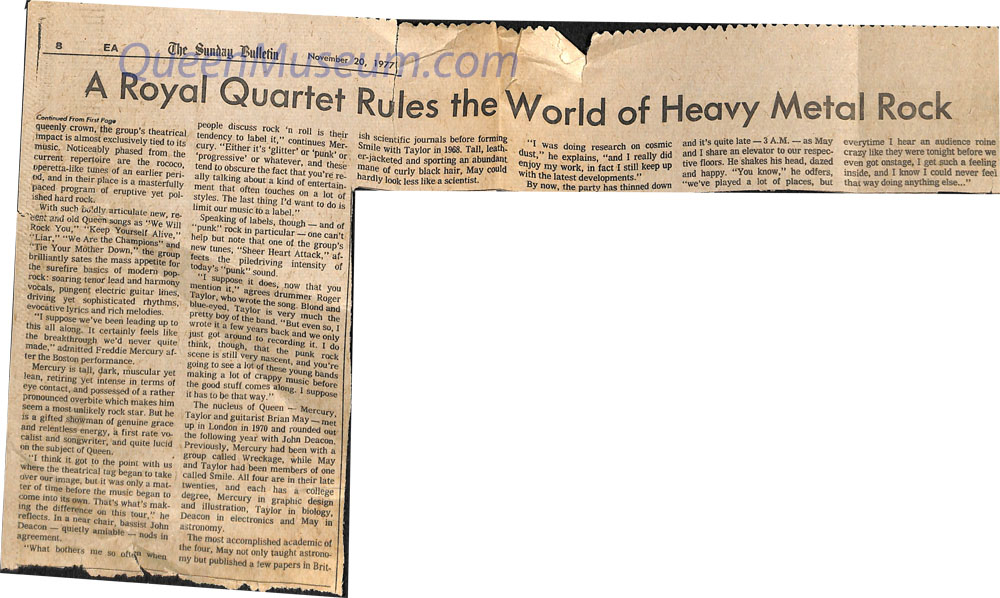 Published on the Sunday Bulletin Nov. 20 1977. By Matt Dumsker

A Royal Quartet rules the World of Heavy Metal Rock

Boston — By New York or even Philadelphia standards, Boston is a generally sedate town, although an an outsider on hand last week at the Boston Garden would be forced to reassess any such generalization. Indeed, the more than 13,000 young rock fans who packed the Garden on the evening of Nov. 12-provided. an awesome example of mass hysteria, as the British rock group Queen unveiled a new stage show of such epic proportion and sustained excitement that there seems no way to adequately describe its impact.

It was only the second performance of the quartet’s current 27-city American tour (which touches down here at the Spectrum for shows Wednesday and Thursday nights), but it was a clear enough indication that Queen has blossomed into the leading practitioner of heavy-metal rock drama, With British kingpins Led Zeppelin temporarily out of the touring picture (due to the sudden death this past summer of singer Robert Plant’s young son), Queen literally reigns, thanks to ah impressive new album — “News of the World” (Elektra Records) — and the sort of non-stop, three-hour, no-opening-act show pioneered by Zeppelin in the early 1970s.

Queen’s triumph — after about five years of increasing popularity and one smash hit single (“Bohemian Rhapsody”) — derives from a wise and welcome change in musical/theatrical direction. Originally a busily theatrical “glitter” band reliant on a multitude of costume changes, smoke, strobe and fire effects, Queen has considerably toned down its flashy excess. With the exception of one major costume change — from stripes to sequins — on the part of lead singer Freddie Mercury, a modicum of smoke and flare, and a massive, 5,000-pound lighting rig in the shape of a queenly crown, the group’s theatrical impact is almost exclusively tied to its music. Noticeably phased from the current repertoireare the rococo, operetta-like tunes of an earlier period, and in their pIace is a masterfully paced program of eruptive yet polished hard rock
With such boldly articulate new, recent and old Queen songs ” We Will” Rock You,” “Keep Yourseif Alive”, “Liar,” “We Are the Champions”,  “Tie Your Mother Down,” the group brillantly sates the mass appetite for the  surefire basics of modern pop rock: soaring tenor lead and harmony vocals, pungent electric guitar lines, driving  yet  sophisticated rhythms, evocative Iyric:s and rich melodies.

“I suppose we’ve been leading up to this all long. It certainly feels like the breakthrough  we’d  never quite made”   admitted Freddie Mercury after the Boston Performance. Mercury is tall, dark, muscular yet lean, retiring yet intense in terms of eye contact, and possessed of a rather pronounced overbite which makes him a most unlikely Rock Star. But he’s a gifted showman of genuine grace and relentless energy, a first rate vocalist and songwriter, and quite lucid on the subject of Queen.

“I think it got to the point with us where the theatrical tag began to take over our image, but it was only a matter of time before the musci began to come into its own. That’s what’s making the difference on this tour”, he reflects. In a near chair, bassist John Deacon – quietly amiable – nods in agreement.

“What bothers me so often when people discuss rock ‘n roll is their tendency to label it,” continues Mer­cury. “Either it’s ‘glitter’ or ‘punk’ or progressive’ or whatever, and these tend to obscure the fact that you’re really talking about a kind of entertain­ment that often touches on a lot of styles. The last thing l’d want to do is limit our music to a label.”

Speaking of labels, though — and of “punk” rock in particular — one can’t help but note that one of the group’s new tunes, “Sheer Heart Attack,” affects the piledriving intensity of today’s “punk” sound.

“I suppose it does, now that you mention it,” agrees drummer Roger Taylor, who wrote the song. Blond and blue-eyed, Taylor is very much the pretty boy of the band. “But even so, I wrote it a few years back and we only just got around to recording it. I do think, though, that the punk rock scene is still very nascent, and you’re going to see a lot of these young bands making a lot of crappy music before the good stuff comes along, i suppose it has to be that way”.

The nucleus of Queen — Mercury, Taylor and guitarist Brian May — met up in London in 1970 and rounded out the following year with John Deacon. Previously, Mercury had been with a group called  Wreckage, while May and Taylor had been members of one called Smile. All four are in their late twenties,  and  each  has  a  college degree, Mercury in graphic design and illustration, Taylor in biology, Deacon in electronics and May in astronomy.

The most accomplished academic of the four, May not only taught astronomy but published a few papers in British scientific journal before forming Smile with Taylor in 1968. Tall, leather Jacket and sporting an abundant mane of curly black hair, May could hardly look less a scientist.

“I was doing research on cosmic dust”, he explains, ” and I really did enjoy my work, in fact I still keep up with the latest developments”.

By now, the party has thinned down and it’s quite late – 3 A.M. – as May and I share an elevator to respective floors. he shakes his head, dazed and happy. “You know”, he odfers, “we’ve played a lot of places, but everytime I hear an audience roine crazy like they were tonight before we even got onstage, I get such a feeling inside, and I know I could never feel that way doing anything else…”