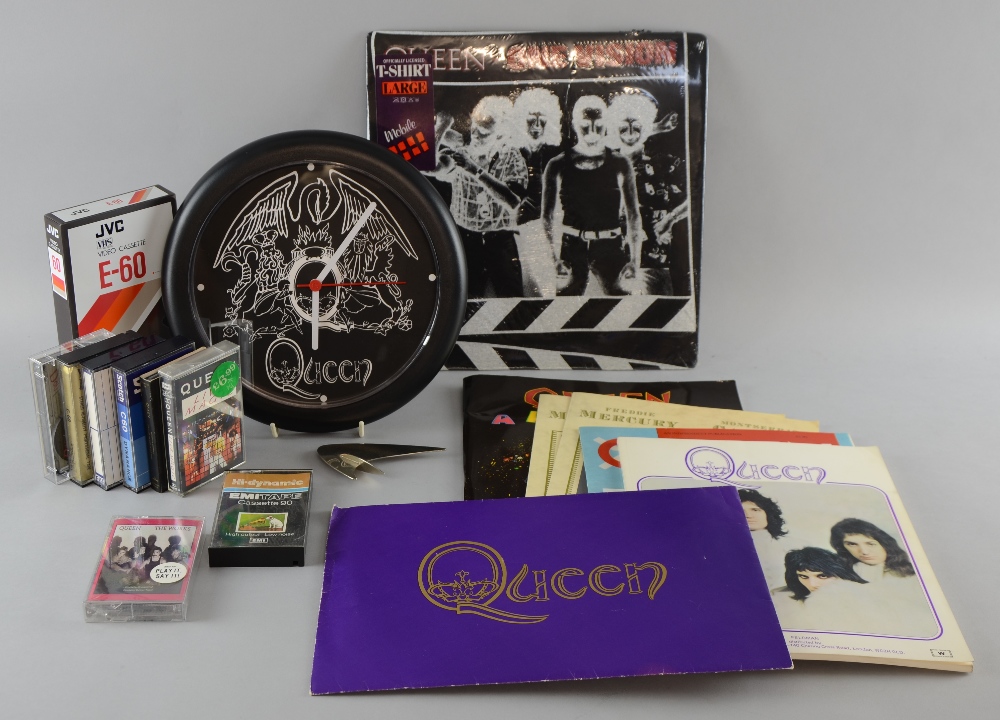 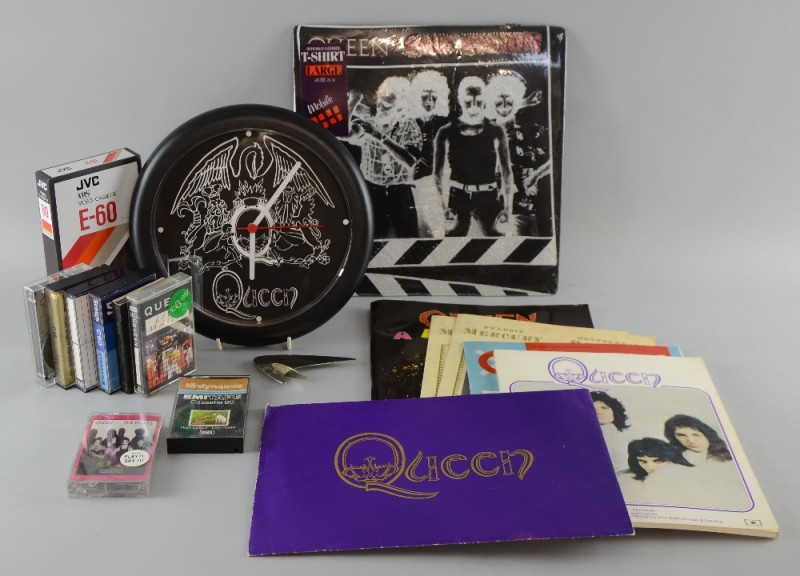 , here’s another lot I acquired from the Freddie’s personal items auctioned in Feb 2015. My first interest, from the published photo above, was that purple folder. I suddenly thought about an early press kit. I love items from early period and the purple and gold colours immediately make me think of 1973 early promotional items. 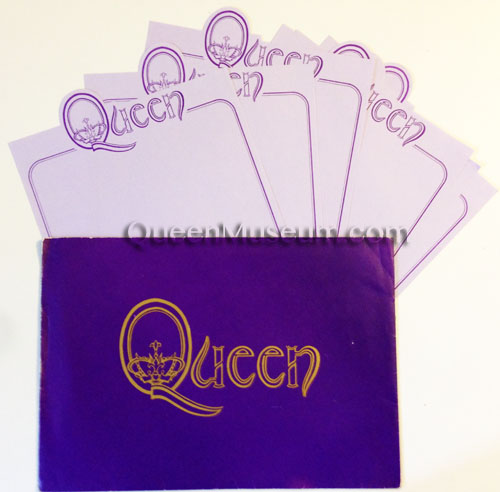 It turned to be a personal promo folder containing the famous Queen Headed Paper in lilac sheet often used by the band for personal handwritten letter (see an example here) or printed for the very early 1973 press kits.

Another item you can also see in the first photo is the Barcelona LP press kit.

Personally I never came across of a copy of it… EMI or ELEKTRA USA ones are more common This is, of course, from Polydor Records. 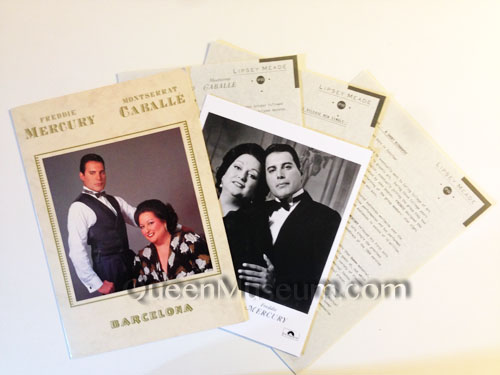 The clock, an official 1980’s merchandise. Not an oustanding piece I know, but nice to see it was saved all this time. The clock was sent, as you can see from the box, by Jacky Gunn, the Official Fan Club secretary.

Ok, le’ts go on… A sealed promotional T-shirt for One VIsion. I must admit that I never came across one… Don’t know if it was ever available for sale (???!!!) 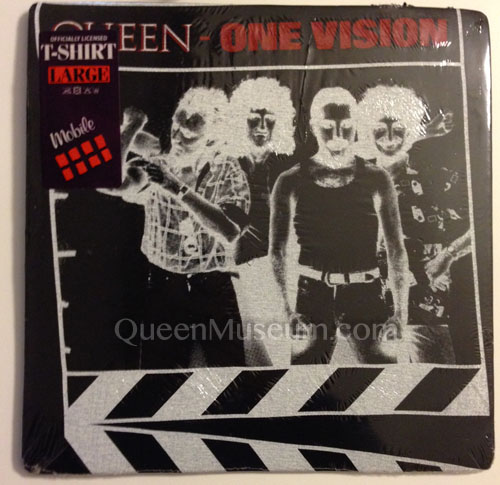 Another nice item put in this lot was a lapel pin, once owned, according to the vendor, by Freddie Mercury himself. I have no idea if he ever wore this pin.. so any help would be very appreciated, maybe you can check some private Freddie’s photos. As I told in the previous article, all this stuff was given by Jim Hutton to S.M. (housekeeper of Garden Lodge during the months after Freddie’s death). 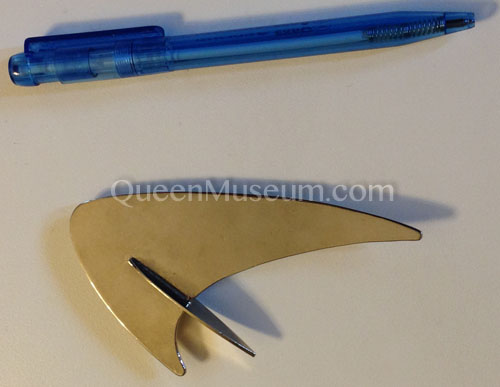 and here’s another image of the pin togheter with an early 1974 official EMI 1974 Music book which was included in this lot along with the Magic Tour Program and another 1986 magazine. 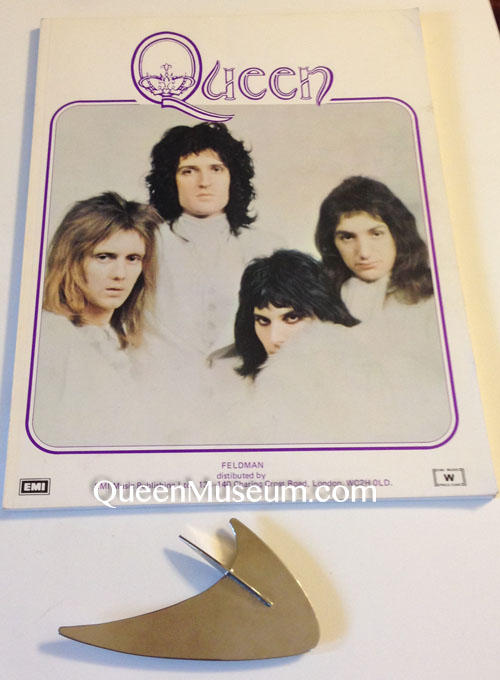 Ok… is it enough? no…. now the magic part comes in. Unexpected surprises and the final proof for me that these items were really from Freddie himself.

You probably have noticed some cassettes in the first photo, the one published from the auction house.

Well there were a couple of those K7 really interesting…. 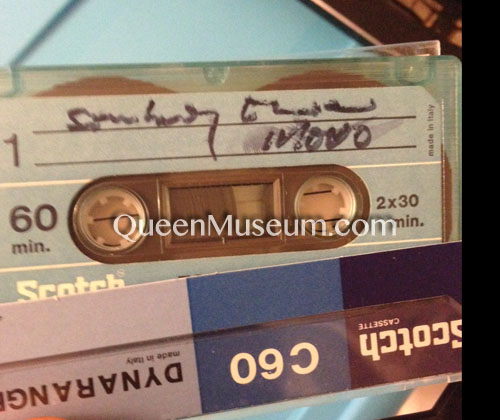 This is a Tape containing a transfer from Reel of the Somebody To Love track. Still an incomplete mix!! It misses the intro and also the bridge part, so you can clearly hear Freddie ending with the voice solo. Very interesting! One of the tape that probably were needed to play by Freddie to work on the Gospel solo which is the final and great part of the Bridge.

The videocassette contains two different edit of the famous 1985 David Wigg Interview, one of 10 min and the other of 5 min, both containing the classic production countdown at the beginning. Maybe sent to Freddie to chose which version has to be broadcasted or just for archive. 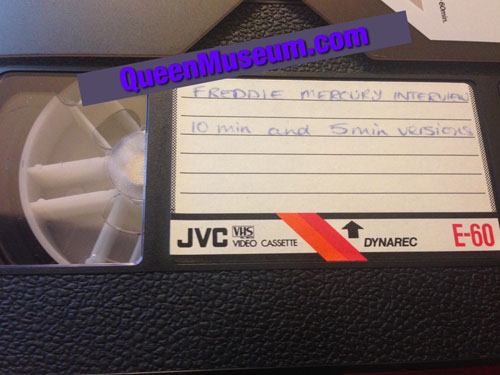 Another tape in the lot was included among others, unlabelled…. 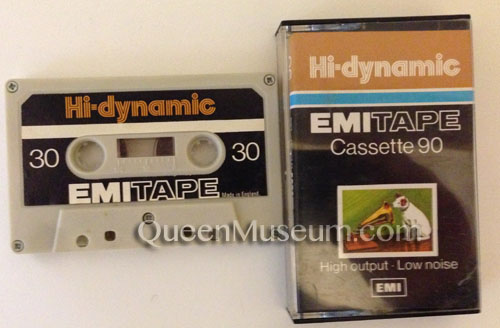 Another reel transfer…. this time: Bohemian Rhapsody. The tape starts with the song as we all know it…. By the end of the song, the recording changes immediately in a Guitar playing… Probably in studio, excercises for about 1 min with some riffs. I’m quite confident this is Brian playing.

Then the most amazing (at least for me) part begins…. This tape contains the original Kenny Everett airing of Bohemian Rhapsody. Yes, the very first moment the song was put on the Radio and presented to the World…. (still excited and shivering while I write this)…

In some of this audio clips, Kenny refers to a tape so I now think that Freddie bring one of these tape transfers to Kenny (or a reel tape) to let Borhap be played on radio. The record, or test pressing was not yet available… and Kenny returned this after having recorded to him some of the aired parts. I cannot imagine Freddie recording this clips himself from the original time… but who knows…

Stay tuned for other informations…. still going deep on these..