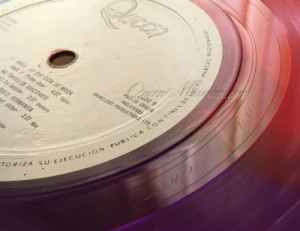 This information is not really in it’s final form, I’ve decided to upload again and it will be updated frequently. Comments and contributions are very welcomed.

This discography is intended to contain information useful for collectors, mainly about Queen vinyl releases worldwide.

The text of this page is originally from Andy Young’s site on line in the 90’s; I have updated with informations about details of new discoveries during the past 20 years.

Mirror cover in UK, USA, Germany, Japan and some other counties, later pressings have grey cover instead.Korean “The Game”is very interesting because it has same PS of UK one but different tracks:”Dragon”-“Bites the dust”-Don’t try suicide” are not included and there’s “You take my breath away” . Maybe problems with censorship?
Black and white cover from Mexico.Taiwan pink cover. MFSL master recording vinyl and gold CD.

Released in all countries”Spread Your Wings (live)” b-side in Japan and USA12″ in Germany and Venezuela, 12″ (with “Bicycle Race” as b-side)yellow vinyl and blue/grey,pink/salmon  and other colours in Colombia.Standard picture sleeve in most countries. Slightly different sleeve in Japan. Some other variations in stamping and writing for other countries. CD3 has Crazy Little Thing Called Love / Spread Your Wings / Flash

Released in all countries except USA”Sheer Heart Attack (Live)” b-side in Japan/AustraliaStandard sleeve in most countries. Slightly different sleeve in Japan.Postcard release in Poland with outer sleeve.

Released in most countriesAs far as I can tell, for the first time ever the same sleeve was used in all countries!

Released in all countries”Don’t Try Suicide” b-side in Japan and USA.  12″ in Germany and France, 12″ promo in USA, 12″ yellow vinyl in ColumbiaStandard picture sleeve in most countries. Different sleeves in Sweden (Play The Game sleeve in black and white), France(12″), Portugal, Japan. CD3 has Another One Bites The Dust / Dragon Attack / Las Palabras De Amor Anotherone bites the dust/ Bicycle Race.Japan 7″ promo only WL cable radio station issue with insert sleeve YPS-014. Japanese pressing for some radio-stations,. It’s coming in a white sleeve with insert on the front, with text, written by a typewriter. They spelled Bicycle Lace, because they cannot pronounce the r properly.

Released in Japan and USA onlyPicture sleeve in Japan

German first few pressings in brown cover. Actually two different ones. One with relief, one without. Dutch “Grootste Hits” liited edition gold bordered cover. Bulgarian white cover, double LP and normal LP. Bulgarian LP with montreux ’84 picture (like the picture disc). Seems to be a bootleg (like picture disc). Two East German compilations (called “Queen” but basically a greatest hits. One with a crest cover, one with the same picture as on the inside of “Queen II”. Polish LP “Best Of Queen” with the picture from the Jazz picture disc on the cover. US release on K-Tel records with different sleeve, and identical Venezualan sleeve. In Venezuela there was also the standard 81 sleeve but G/fold. South African 1985 issue including T-shirt with tour dates.

The rarest Greatest Hits sleeve is possible one of the rarest Queen items ever. In 1980, a compilation was first planned, and it got as far as having a sleeve designed. This was shelved when the Flash Gordon project came along. The running order was the same as the eventual UK release, but without the Flash song. Four copies of the mock-up sleeve are thought to exist (along with details of a possible press campaign). The style of the sleeve is with a picture of each member taking up a quarter of the sleeve.

Greek release has gatefold sleeve.Venezuelan issue g/fold also with an mistake on vinyl: Label says as last song on A-side “Action This Day” but it plays “Cool Cat” and of course you find “ATD” on the B-side instead of “CC”.Grey vinyl in Columbia. S. African issue is g/fold.

Released in all countries12″ in Germany and some other European countries, 12″ yellow vinyl in ColumbiaStandard sleeve in most countries. Different sleeve in Japan, some other minor layout and stamping changes in other countries, particularly Portugal.CD3 has Under Pressure / Soul Brother / Body Language

Released in all countries12″ in Germany and some other European countries. 12″ promo in USAStandard sleeve in most countries. Slightly different sleeve in Japan. Censored sleeve from USA (harder to find than the original fleshey sleeve).

Different sleeve from South Africa with 3 sides open.(Click to see)

Spanish subtitled sleeves from South America, though Mexico and Argentina sleeves use different words for translation!

Released in Japan and some European countries only”Las Palabras De Amor” b-side in Japan12″ in UK only featuring extended version.Standard picture sleeve in most countries. Different sleeve in Japan. Spanish subtitled sleeve from South America (both 7″ and 12″). Dutch 12″ sleeve with the colours in a different order.

Released in all countries A UK 7″ Ga-ga different p/s exists.It has the group standing in the pose where they have their arms outstretched wearing red tops and black leather trousers on the front and on the back they are on the stage in the same costume in front of the crowd from the promo video the number is still Emi Queen 1.

Only few printer’s proofs of this exist. A finished but not glued sleeve.

12″ featuring extended and instrumental versions (not USA)Standard picture sleeve in all countries. Slightly different in Japan.

Also, a very different Japanese promo 45 with unique insert, as well as a Test pressing 7″.

Released in all countries”Machines (instrumental version)” b-side in USA12″ featuring extended version (?not USA, not Japan)In the UK, USA,Portugal and South Africa, there were a set of four 7″ singles with a member of the band on each. In other countries there was a 7″ featuring all four with either a red or a white border. The 12″ sleeve always has all four, and again has either a red or a white border. It is rumoured that the set of four in the UK came in versions with white letters and with gold letters. Not sure if this is true. Freddie’s sleeve is **much** more common than the others (Roger’s seems to be more common in Portugal!)CD3 has I Want To Break Free (remix) / Machines / It’s A Hard Life.

There is a version of the UK 7″ PS which has Roger looking in a slightly different direction. You can easily tell the difference by looking at Freddie’s wig. If it has a v-shape to the left then it is the common sleeve. If it doesn’t then it is the rarer one.

The UK release initially had a live picture sleeve, but this was withdrawn because Brian objected to something or other. Some shops had it for sale for a week, so it isn’t clear why it is as rare as it is. The usa 7″p/s live hammer to fall is slightly different to the uk as it Has a gold band round it and a capitol label in the corner. A Canada sleeve is also rumoured but needs confirmation.

Man On The Prowl / Keep Passing The Open Windows

Planned for release but withdrawn. Some promo copies and test pressing exist. No picture sleeves, though it has been found in “Thank God It’s Christmas” sleeves! The only commercial and withdrawn issue found is the irish one.

Released in most countries (not USA or Japan)Australian release doesn’t have KPTOW.12″ with extended versions of MOTP/KPTOW in some countriesStandard picture sleeve in the countries that had a picture sleeve.

Limited edition – number unknown but it is still available in shops 10 years later! An initial set of probably 300 were fully autographed (on the “Complete Vision” sleeve).

Released in all countries12″ in most countries (not Japan) featuring Extended VisionUK release had 7″ and 12″ with or without a red inner sleeve. Limited edition UK 12″ release in plastic negative sleeve with red inner sleeve.

Released in all countries “Gimme the Prize” b-side in USA (though it says “A Dozen Red Roses for my Darling” on the sleeve)12″ in most countries featuring extended version12″ picture disc in UK with b-side credited as “Don’t Lose Your Head (instrumental version)” though it is the same as “ADRRFMD”Standard sleeve in most countries. Different sleeve in France and USA.CD3 has A Kind Of Magic / A Dozen Red Roses for my Darling / One Vision .1995 bootleg rerelease of picture disc from Italy. There is a noticeable clear border running round the edge of the bootleg which is not on the original. The b-side picture is different as well.

Released in some countries only (not USA or Japan)”Gimme The Prize” b-side in New Zealand7″ picture disc in UK12″ in most countries featuring extended versionStandard sleeve in all countries. Heather is near the bottom right. Jane is in the middle on the bottom, and therefore is probably on the picture disc as well. The woman climbing all over John is Sue, and the chap with the scarf is Bryn.

Released in Germany, Holland, Spain, USA and Australia only”Who Wants to Live Forever” b-side in Australia12″ featuring extended version in these countries.Standard sleeve in all countries.

Released in some (mainly European) countries only”Don’t Lose Your Head” b-side in New Zealand12″ in most countries featuring “Forever” (piano version)Standard sleeve in most countries.Rereleased in Germany and Holland with “Friends Will Be Friends” after Freddie’s death. Italian bootleg picture disc released 1993.

Released in France and Spain only.12″ (from both countries) does not feature extended version.Standard picture sleeve. French pink promo version. Spanish sleeve has different back.

Not released in USA.

Promo vinyl release from Japan. Very limited quantities. The number isn’t really known (don’t believe everything you read in Record Collector) I think there are hundreds of copies.

Released in some countries (promo only in USA)12″ and CD5 released in Europe featuring extended version.Promo CD5 released in USA featuring “now edit” and “almost now edit” as well as two other. Single track promo CD5 also exists.Shaped picture disc in UK (all three stages of test pressing [clear, plain and uncut] are known to exist)Standard sleeve in all countries

Released in some countries12″ and CD5 released in Europe featuring extended version.7″ and 12″ clear vinyl released in UK Standard sleeve in all countries

Released in some countriesPromo CD5 released in USA with “My Life Has Been Saved”, “Hijack My Heart”, “Stealin”. Single track pink promo CD5 also exists.12″ and CD5 released in Europe featuring extended version.7″ poster bag and 12″ etched disc released in UKStandard sleeve in all countries.

Unique custom clear 12″ from the factory have been leaked with unique design.

Released in some countriesThere also excists a 7″ w/l promo from JApan, same like ANOBTD.It has a plain white sleeve and an insert.Other side: Paul McCartney ‘My brave face’.12″ released in Europe (CD5 in UK) featuring “My Melancholy Blues (live)”7″ hologram sleeve and 12” with insert released in UK.Standard sleeve in all countries

Released in UK (LP/CD), Japan (CD), USA (CD and limited promotional vinyl picture disc 1995). The USA release is called Queen at the BBC and has a totally different cover. UK release by “Band of Joy” rather than EMI (but still official)