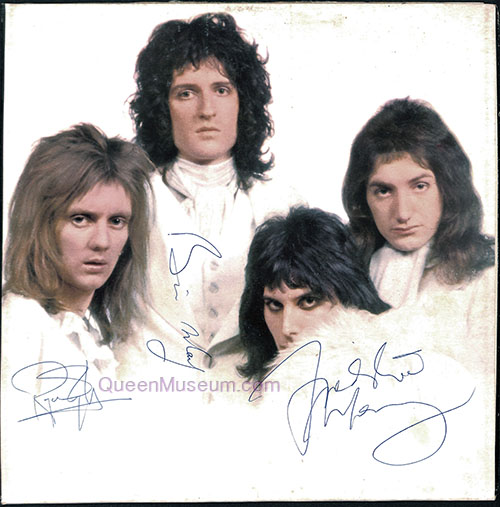 An old Queen fan from Australia which kindly provided me this Queen II lp , autographed in the inside sleeve, shared his memories….

“I first became interested in Queen after reading about them in the English music press. At the time, there was very little, if any, interest in Queen in Australia. Things changed dramatically with the success of the single Killer Queen in 1974. After the following year Bohemian Rhapsody was as big a success in Australia as it was in Britain, Australia became added to the band’s A Night At The Opera world tour. I had no idea at the time, but the very last show of the tour took place in my city, Brisbane, Queensland, on April 22, 1976. I attended the concert at Brisbane’s Festival Hall with several old high school friends,

After the concert, my friend and I went to the Park Royal Hotel, where all the big bands stayed when they came to Brisbane. (This place now calls itself the Royal On The Park Hotel.) We waited outside the entrance of the hotel in the hope of getting the band’s autographs. After about 30-40 minutes, Brian May and Roger Taylor arrived in a black limo. They got out of the vehicle and began chatting and signing autographs for the assembled fans. They were polite and extremely affable. They both signed my copies of Queen II and A Night At The Opera. Frank later told me that he’d covertly felt up Taylor’s hair. He had wanted to know what it felt like and the phrase he used to describe it was ‘stiff as a board.’

After May and Taylor left, the hunt was on to find Freddie Mercury. A couple of people were circulating around and about the hotel in an effort to track him down. While we waited, I distinctly recall hearing the band’s tour manager – or he could have been a roadie – soliciting girls to ‘go upstairs to meet the band.’

Eventually we heard calls that Mercury had been located in a lift. A rush of about a dozen people headed through the hotel foyer towards the lifts. Mercury was found cowering – in feigned terror – in the lefthand corner of the first lift on the left. He was obviously in an extremely playful mood and professed amazement that we wanted his autograph. He duly signed my copies of Queen II and A Night At The Opera.

I don’t remember anything that happened that night after being part of the throng that surrounded Mercury in the lift, but I imagine we waited for sometime afterwards in the hope of also getting John Deacon’s autograph as well. All I know is that he never showed up and I was stuck with album covers that had only been autographed by three out of the four!”