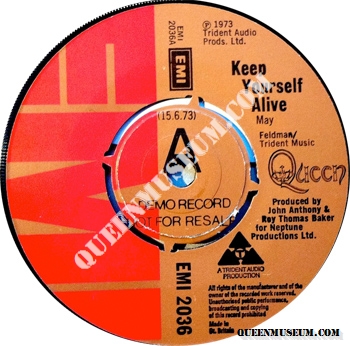 Matrix numbers on the run-off are:

One of the rarest early Queen 7″ single is the withdrawn version of their very first release. In another article we saw from the Queen first press sheet that the new single was announced to be released on June 15th 1973 but actually it was postponed on July 6th as the “most common” demo release 7″ shows on its label.

But some copies of the “June 15th” 7″ exists and surfaced some years ago thanks also to John Ingham, former  EMI Press officer, who saved some of them.

Here’s what he recalls about this rare single:

“In 1973 I worked at EMI Records as a Press Officer. It was my job to send music critics and journalists the latest records and get stories and interviews in the press.

One of our new signings was Queen. Not everyone liked them. The lead singer looked strangely different from the usual lead singer look ad it was rumoured he was gay. Enough in those days for people to dismiss him and the group. Most staff people didn’t think the first album was very special, but Queen was a prioritu act so the album and single would be “worked” to the media.

When the single “keep Yourself Alive” came into the office there was quite a bit of interest because it was intended to be the single that broke them as a commercial success. I had a box of 25 to send out to the press and the first few had gone when I received a message that I was to sop giving them away and all copies had to be handed back. This went to everyone in the building. The wrong mix had pressed up as Dj/Promotion copies. Now it was being recalled and a new single pressed up and released.

I took the box with it’s precious records home with me and put them away. I had 14 records. I asked arounf the office and everyone had given their records back. They had even been taken back from radio DJ’s. It looks like mine were the only copies that didn’t go back”.