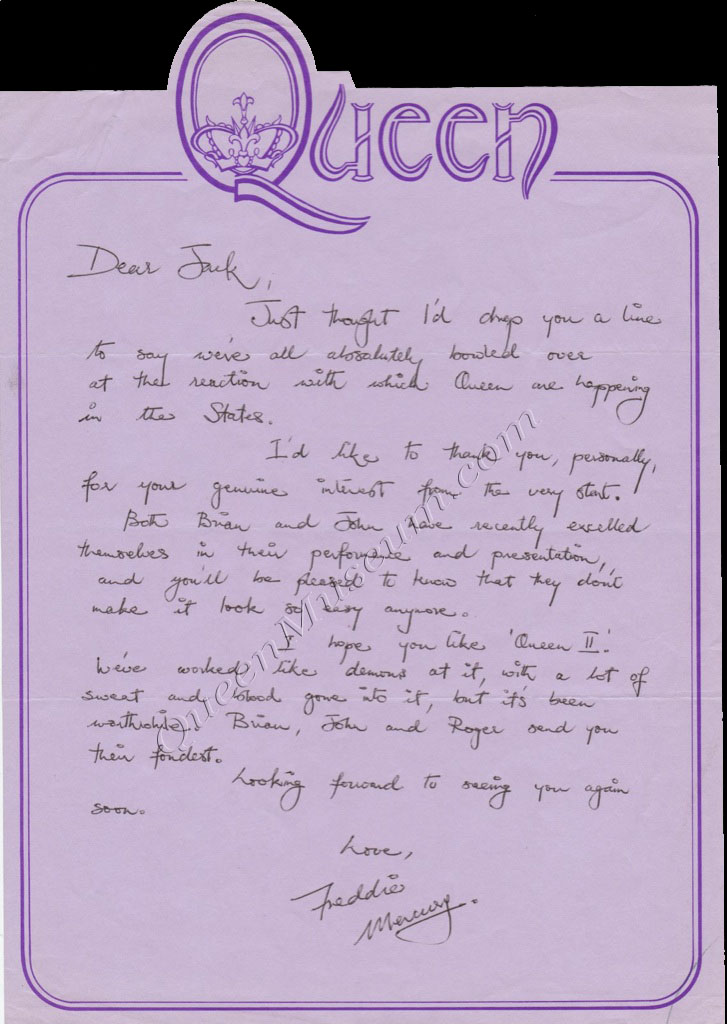 This item worth a page in Queen Museum.com and you’ll understand why:
a handwritten letter sent by Queen frontman Freddie Mercury to Elektra Records founder Jac Holzman, the legendary music executive who signed Queen..Mercury sent this letter to Holzman in 1973 as the band was finishing “Queen ll,” thanking him for his “genuine interest (in Queen) from the very start.” Holzman was very aggressive in pursuing and signing Queen, which he wrote about with great eloquence in his excellent book “Following The Music” (if you’re a fan of Elektra, or it’s artists, I can’t recommend this book more highly. Holzman signed many extremely important artists, including The Doors, Tim Buckley, the Butterfield Blues Band, The Stooges, the Incredible String Band, Judy Collins, and many more.) 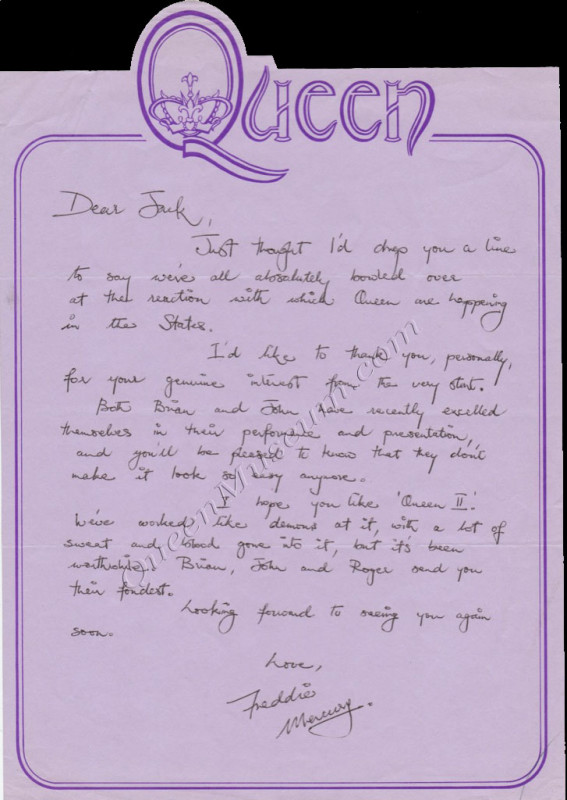 The full text of the letter reads: “Dear Jack, Just thought I’d drop you a line to say we’re all absolutely bowled over at the reaction with which Queen are happening in the States. I’d like to thank you, personally, for your genuine interest from the very start. Both Brian and John have recently excelled themselves in their performance and presentation, and you’ll be pleased to know that they don’t make it look so easy anymore. I hope you like “Queen ll.” We’ve worked like demons on it, with a lot of sweat and blood gone into it, but it’s been worthwhile. Brian, John and Roger send you their fondest. Looking forward to seeing you again soon, Love, Freddie Mercury.”

As you might imagine, artists don’t often send record executives this kind of personal letter of thanks. Jac was touched, and kept the letter it in his files. Recently Jac decided he’d like to sell this letter, and use the proceeds to raise funds for a music scholorship in Freddie’s name, and he’s asked us to sell it on his behalf.

When collecting autographs and letters, the important things to consider are the provenance (where did the item originate, who’s collection has it been in, how has it come to market), content (in the case of a letter, does the text relate to why the writer is famous, or shed light on their career or work), timing (when in the writer’s lifetime/career does it date from), format (typed letters are less desirable than handwritten ones; personalized stationery adds value) and of course who the seller is and what kind of guarantee of authenticity they offer.

In every way, this letter is a home run. It comes from the original recipient, a famed record executive who signed Queen, and who has written a two-page letter of authenticity to accompany it. The content and date couldn’t be better; Mercury writes just as Queen has broken big in America, to the man who made it possible, expressing his sincerest thanks. The format is equally impressive—this is completely handwritten on die-cut Queen stationery. And of course, we guarantee everything we sell to be authentic with no time limit.

This is as extraordinary a Queen collectible as you could ever hope to find—a one-of-a-kind rarity from a true legend, Freddie Mercury.

A facsimile copy of this letter is part of the Jac Holzman display at the newly opened Grammy Museum in Los Angeles.