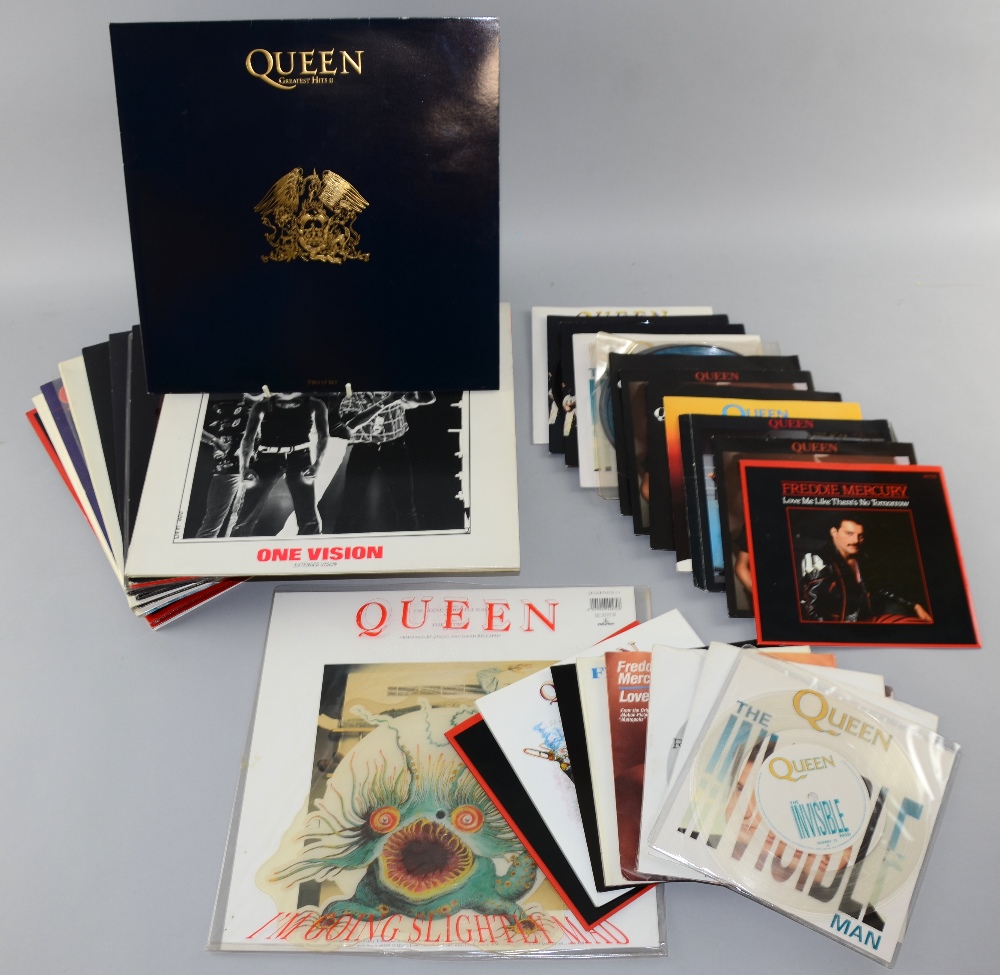 In feb. 2015 some very interesting records and items once belonged to Freddie mercury have been auctioned from a UK-based auction House. 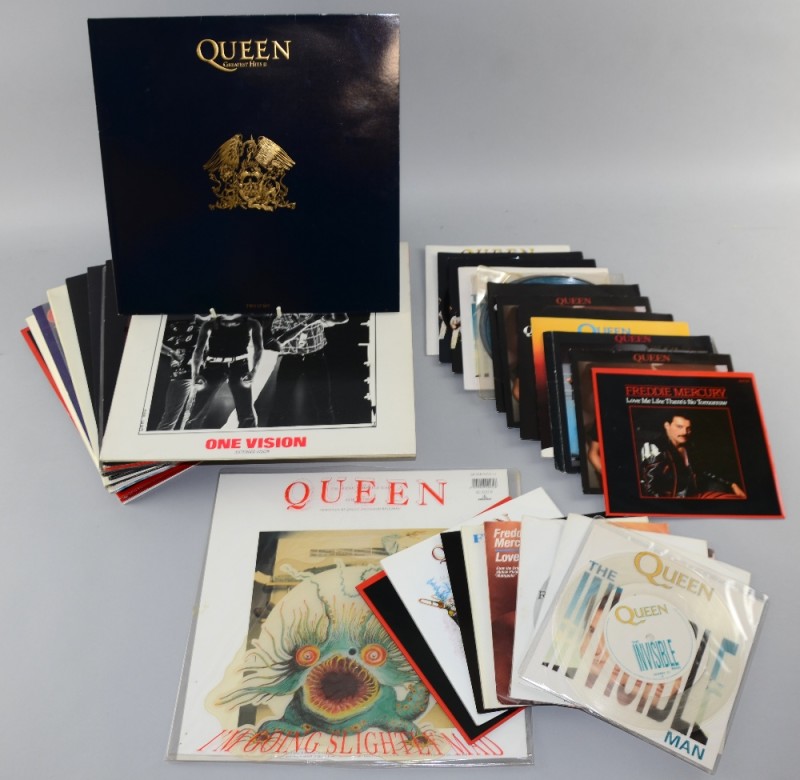 This lot consisted of approx. 43 records both 12″ and 7″ from Freddie personal collection. Then given to Jim Hutton who presented them to the housekeeper of Garden Lodge who helped him to move after Freddie’s tragical death.

Hidden in this lot there were two very rare Queen collector’s gems which probably were not spotted by many bidders attending the auction both live and on line.

The first rare sleeve found in this lot was the Radio Ga Ga withdrawn picture sleeve. Finally I have an original one  in may hand. There were much debate in the last 15 years about this one. This is presented not finished with front and back laying in a same card and with folding parts for the final closed. In early 2000 a number of this have been circulated but I cannot check the quality of printing of the small details especially on the back of the sleeve.

The cat. number and the EMI details in the bottom center of the back sleeve are perfectly clear and sharp in the Freddie’s copy.

Originally this alternative sleeve appeared in the market in mid 90’s from the list of a famous UK rare record dealer: Greg Vandike. I rememeber he told me that the artwork of the sleeve was in a A3 printed card ready to be cut. Some collectors who have seen the finished closed one have told me that some printings were not so sharp. But in this one I see no problem. So we still have to investigate if a fake issue of this exists.

Here are the pictures of the front and back of the radio Ga Ga alternative withdrawn sleeve: 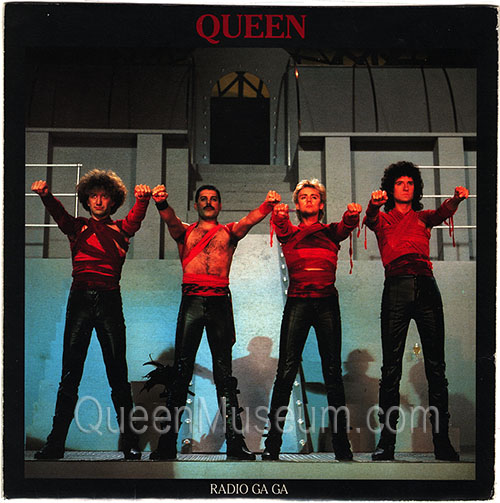 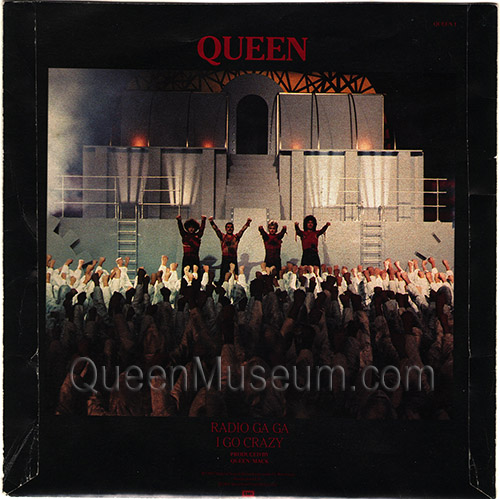 As for test pressing and acetates even test sleeves were usually sent to band members for approval. This sleeve concept was aborted and the most famous one was then chosen for its worldide release. So this is an extremely rare cover.

But that’s not all….

there was another hidden jewl inside the lot. Another rare picture sleeve, unknown to most of the collectors worldwide: the inhouse EMI promotional picture sleeve for You’re my best Friend 7″ single. I Only saw one copy of it in one of the box of records and memorabilia from the 2011 ‘Stormtroopers in Stilettos: Queen, The Early Years’  exibition.

That was from Brian May’s personal collection. Some collectors thought it was a radio home made sleeve or probably fake but it’s not. Having found one in a set of records coming from Garden Lodge and once in Freddie’s collection, it’s confirmed that this is a genuine item.

Also, quality of the paper, weight, and style are perfectly matching with the Bohemian Rhapsody UK 1975 picture sleeve. There’s also a reference printed on the back of this “Best friend” sleeve to “Delga”. Same printing you find in the “Borhap” sleeve which refers to the factory where this sleeve was printed. Probably made for inhouse EMI purpose, was almost unknown for nearly 40 years.

here are the picture of this rare single:

The record inside this sleeve comes with the “factory sample” sticker on the label. Matrix numbers also shown that this comes with the earliest codes in the run-off grooves with rare first mother (1) and first stamper (G), same as the white label test pressing version. 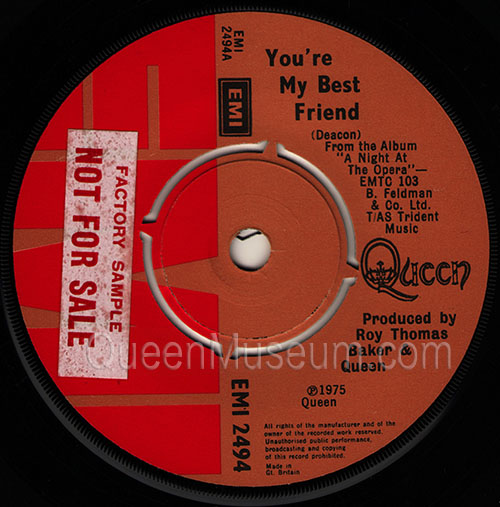