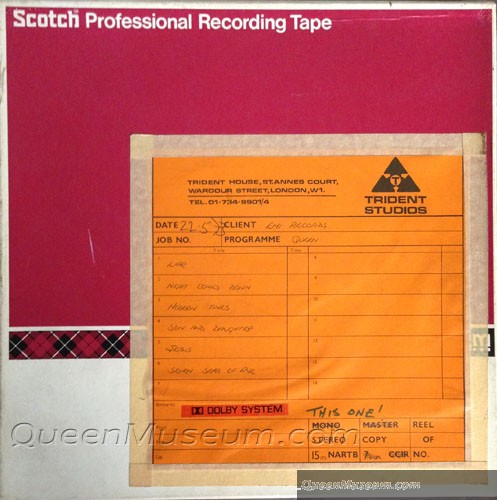 “Queen” was officially out in UK  on July 13th 1973;  you probably know everything about early days and how the come to an agreement with EMI records to release their first work. Here We will focus on the collector aspect of their debut LP. Sometime additional useful informations can be taken from original press sheets, withdrawn editons etc.. so let’s start…

Finding acetates or reel to reel copies of the master tapes is quite impossible. Only few appeared in the auction houses and on private sales.

The very first piece of vinyl (not acetate) with the first Queen work on it is what in the collectors language is called “Pop Conference” Test Press LP.

I could not find any information about when this conference was held. EMI organized one in 1973 to promote three new artists. One was Queen, the other two were Blue Mink and James Webley ( the EMI’s answer to Elton John, at least so they hoped).

All three artists used the same Die Cut promo cover, featuring on the back images and contact informations of EMI managers.

There aren’t reported any earlier matrix codes (3u – 2u) for their UK debut LP. Please check this article about decoding UK matrix numbers.

So the first press of the commercial issue should have these codes in the run-off groove. Apart from the “1 G” letters which identify the mother and the stamper all the other informations should appear on copy released in July 1973. Catalogue number which EMC 3006 is reported on the promo sheet given with the LP.

All the publicist and press people were given the very first Queen press kit with informations about this forthcoming  release. It’s not sure if the purple envelope with the Queen gold crest was used to contains the promo stuff. Maybe it was used in the next weeks or month as promotion for both the LP and the UK tour supporting Mott the Hoople.

The EMI promotional 10×8 photo is not a proper photo paper but more similar to card paper, the back is brown. This the same photo early fans, writing to Trident before Fan Club were born, received fully signed by the band!!

There’s an interesting information in this sheet. The Release of the album is promoted together with the issue of the first Queen single out on June 15th.

You probably know from Queen bio’s that the first Single “Keep Yourself Alive/Son & Daughter” was out on July 6th, and not on June 15th. But Recently a copy of a demo 7″ appeared featuring on the label this date which matches with what is reported on that promo sheet. According to a uk journalist who worked for EMI back in 1973 in promoting records, this was withdrawn for a wrong mix, even if no substantial differences were found with the released version. All copies were destroyed but a dozen were saved by him.

“Queen” or the album which many collectors and fans call “Queen I” was released July 13th in UK with this picture sleeve:

The cover of the first Queen LP was created by Freddie, Brian and Queen’s photographer  Douglas Puddifoot (what’s better than reading about the cover directly from Brian himself, check that link). 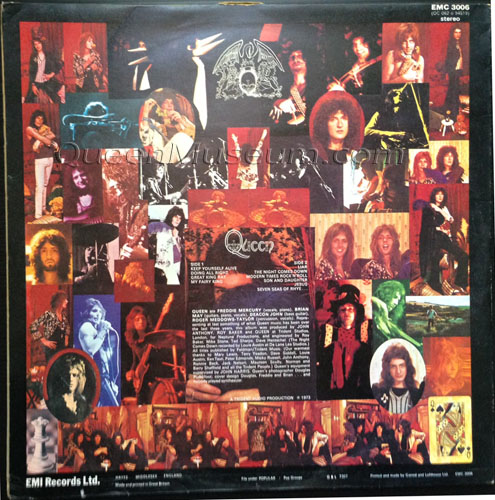 EMI records didn’t use white label issues on LP for promotional or radio distribution. But demo LP were usually give with a sticker put on the label saying “Factory sample – Not For Sale”.

I never came across a proper test Pressing with blank white label of Queen I but probably exist both in single sided version and double version. if someone owns a copy please contact me.

There’s also a different version of the LP from 1973 which differs in matrix numbers with the usual codes we are used to see in EMI pressings.

It comes with the following matrix numbers: 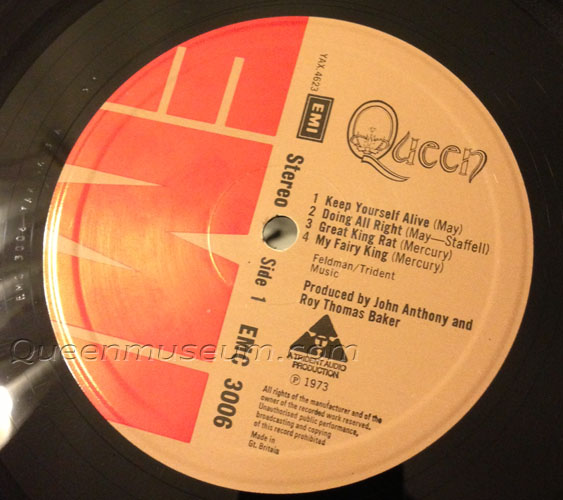 After some research I’ve found it was pressed in a different pressing plant probably where Vertigo Pye  LP’s were produced.

The Queen machine now started and the band is back in studio working on their second album in Summer 1973 but promotion is active and a new tour is set to be in Autumn.

and one of the very first music press article about “Her Majesty”:

QUEEN – and it’s not often you can make a promise you just know will turn out true – are probably the most spectacular, dazzlingly inventive and visually stunning new band you’ll ever have heard in a long, long time.

Rash?   Not really, because QUEEN have already captured the imagination of the Rock ‘n’ Roll business.   How mamy new bands have you heard lately that could move ‘Melody Maker’ to call them “amazing” and “New Musical Express” to say “if these guys look just half as good as they sound, they could be huge”? And all on the strength of a debut album, ‘Queen”, recorded nearly eighteen months ago?

They even fooled John Peel, who raved about the synthesiser work throughout that album and the debut single from it “Keep Yourself Alive”.   The catch? – it wasn’t a synthesiser at all.   Just Brian May’s dazzling lead guitar work.

QUEEN – Freddie Mercury (lead vocals), Brian May (guitar, vocals), Deacon John (bass, vocals) and Roger Taylor (drums, vocals) – got themselves together a couple of years ago, before Bowie and Roxy Music came along to turn Glam Rock into the first new music wave of the seventies.  QUEEN are glamorous, bui all it’s down to is sheer charisma and perfection.   There’s not a trace of mascara anywhere near them .  QUEEN are quality.   They’re a name on everyone’s lips ..  and they could just turn out to be the new band of the seventies.

They made their debut on record back in the early summer.   They’ve been working since on their second album and single.   And perfecting their live act for their debut British tour.   Now that’s come about, when QUEEN support Mott the Hoople throughout November and December,   They’re ready.   Are you?

“Queen” was reissued in early 80’s in UK, as well in other EU countries under the FAME  label as part of reissue series. 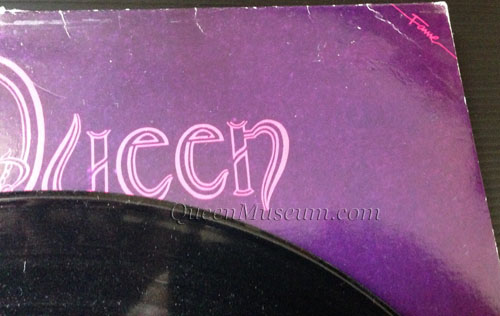 Last reissue in heavy weight vinyl is from 2009. Parlophone with EMI classic label.Bar Code on the back PS.