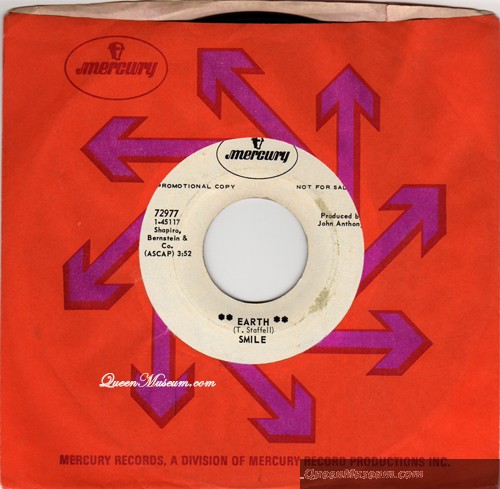 The original Smile Mercury promo single.The original American promo was believed to have the matrix number (45117-1-1-1 and 45118-1-1-1) written in block-printed characters on the vinyl, where all the pirates have handwritten, script printed matrix numbers. On a Record collector article about pre-Queen releases there was written that original Mercury promo 45 came not with handwritten matrix numbers. I never had a confirmation on this from any Queen serious collector. 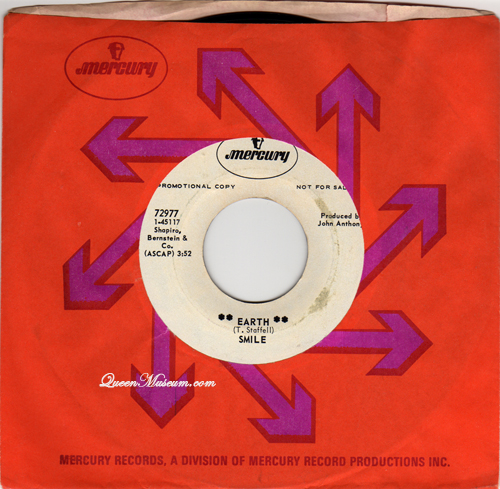 That is supposed to be the most important visible difference between the original and all pirate copies.

However referring Queen collector Christian Haudum with his considerations ( appeared on Queen related web site some yrs ago) about this vinyl, I also believe that  this promo 45 is an original despite the fact that it also has a handwritten matrix number. Christian explains the differences between this version and the other known pirates:

1. the paper of the labels is not as thin as on my MINT condition pirate
2. the printing on the labels is much clearer and with really sharp edges.
especially the thin letters of ‘NOT FOR SALE’ and ‘(T.Staffell)’
3. although the record is scratched the sound is clearer than of the pirates
4. the matrix numbers are ‘45117-1-1-1’ and ‘45118-1-1-1’ and have MR at 180°
not in front of that like the pirates
5. the structure of the vinyl under the label is different, it is not as
plain as on the pirates. The label is higher than the reels and there is a
clearly visible edge that shows that the vinyl is not as thin there than on
the other parts of the record 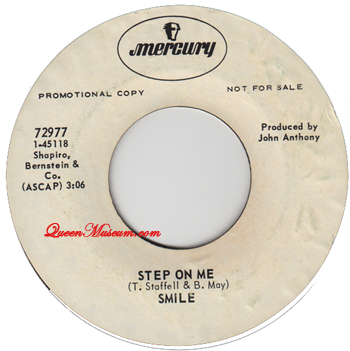 Label A and B of the Original Mercury 45 from 1969. Disc made of styrene

I can also confirm this comparing it with one of the bootleg versions (see below picture) of this single and also with other original Mercury promo 45 of that era. Also having compared two copies of the promo Mercury 45 I can tell you that both have handwritten matrix number printed exactly in the same “way”. I mean, the printing is from original master not added by hand in a 2nd time. Maybe there was a bit of confusion in interpretate what was written in that article (as often happens with RC articles). ITS MADE OF STYRENE NOT VINYL WHICH MEENS IT WAS DEFINATELY PRESSED IN THE U.S. BECAUSE THE UK OR EUROPE JUST USED VINYL AND STYRENE WAS ONLY USED IN THE 1950’s – MID 1970’s. THIS IS CONCLUSIVE PROOF THAT IT IS NOT ONE OF THE BOOTLEGS AND IS AN ORIGINAL. 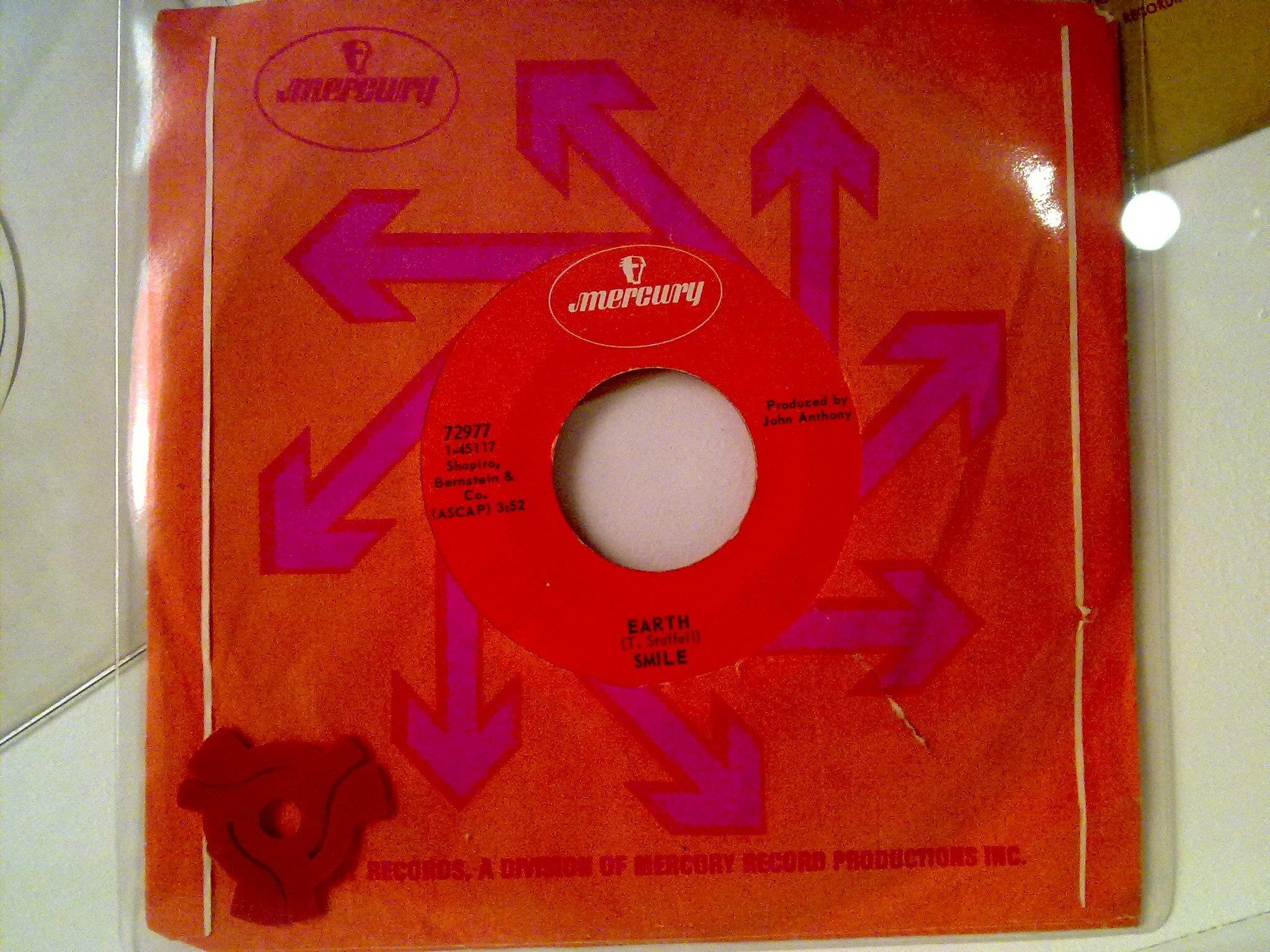 At the SIS exibition in 2011 a red label of the Mercury records “Earth” single from the Smile appeared for the first time in public.. at least for me… Has anybody ever seen another one? Could it be from Canada or some copies were pressed ad immediately pulled back as a commercial edition never appeared…. Thanks to Luca Navacchia for getting this picture at that time 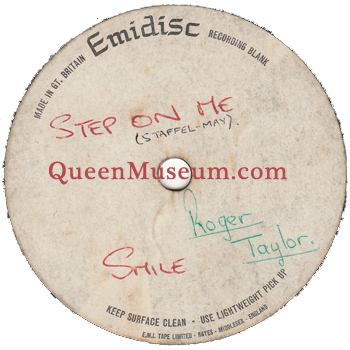 The are no vinyl reported in UK, but of course as the songs were recorded there acetates exists. the following picture came from an auction of some years ago. Emidisc label. 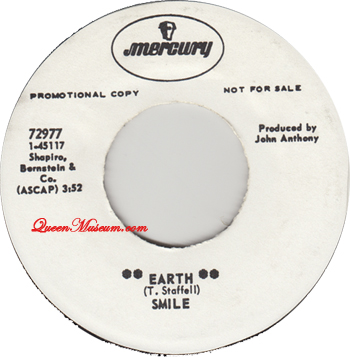 Smile 45 fake with matrix numbers 45-11385 S.
It’s on vinyl (not styrene) and look how fuzzy the written are. Disc is heavier than the original US mercury one. Some copies can be found with uncut 33 hole label (below there’s the 45 hole anyway).

I have spoken to record collector and Mercury and various people in America and none have ever seen or have any record of the stamped matrix version,.A great number of bootlegs have been made of this promo most in the early 1980’s but they all had flaws like 2 records stuck together and a -1 missing off each sides matrix and small perforations in the record label at 9 & 3 oclock where they had been printed off. This has none of the common flaws and none of the unusual ones either, it has small letter stampers on each side which the fakes didnt and it has very clear text on the labels were as most of the fakes were a bit blurry.

A great number of bootlegs have been made of this promo most in the early 1980’s but they all had flaws like 2 records stuck together and a -1 missing off each sides matrix and small perforations in the record label at 9 & 3 oclock where they had been printed off.  This has none of the common flaws and none of the unusual ones either, it has small letter stampers on each side which the fakes didnt and it has very clear text on the labels were as most of the fakes were a bit blurry.

Bootlegs from early 80’s came in black, red and clear vinyl (picture below). Like said before I’ve seen also bootleg with 33 hole not the 45 one. Mercury records never printed 45 in USA during the late 60’s with 33 hole. The clear and red vinyl issues have the matrix numbers in the dead wax with “MR”next to the cat. no. and not at 180°, so probably the black vinyl version with this aspect was produced in the same time of the two colored ones. 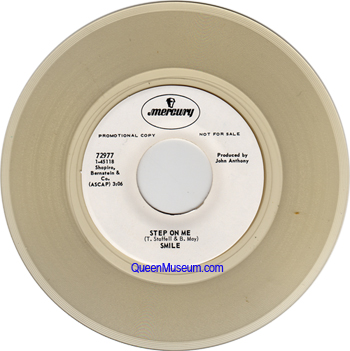 Anyway if there’s a collector out there who own a copy of this single with block capital letters printed matrix no’s please contact us. 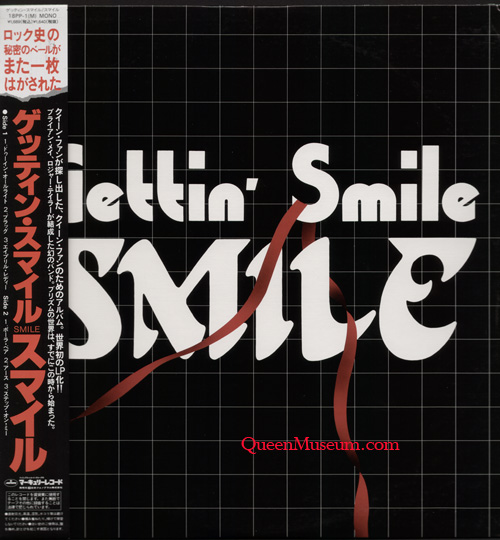 Getting Smile
Mercury 18PP-1.
Six tracks Mini LP released in Japan only in Sept. 82.It includes all the work Smile made in Studios in late 60’s.April Lady-Blag-Polar Bear-Doin’ Alright- Earth-Step On Me. 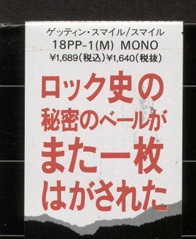 In early 90’s this album was bootlegged with various coloured edition.This “reissue” can be recognised but an additional number after 18PP-1 (18-PP(M) the original, and on a bootleg it is 18-PP(U). There is also some difference on the OBI strip.

The fastest way to tell the difference from vinyl to styrene:
VINYL – label is pressed into the record
STYRENE – label is glued on top of record.
The styrene are molded and have a flat edge to the record with a fine line down the center of the edge.
The vinyl issued have a sharp edge (as do most records) and were trimmed at the pressing plants.
A styrene record is physically lighter in weight than a vinyl one and a bit stiffer.Most US 45s on Columbia and A&M are styrene, most Capitol and RCA’s are on vinyl.  I have seen very few UK pressed records on styrene.